The following short story was published in “Allegro”, the newspaper of the New York local of the American Federation of Musicians. Rich was working at the Omni Park Central at the time, and the incident described occurred in front of that hotel. 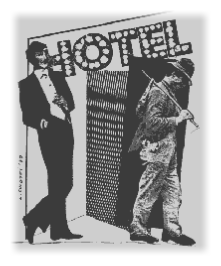 Another cocktail hour. The room was full of people not listening to music. They were paying more attention to the free hors d’oeuvres, enjoying their end-of-work-day conversations, closing their deals, and having a few to ease the tensions of the day, but not listening to music. Some all-too-familiar feelings drifted into his head. “Is this worth it?” “Do I even like what I’m playing?” He instructed himself, “Shift into automatic and get through the night.”

Outside in front of the hotel he watched the flow of traffic and the occasional pretty girl. It was a cool, pleasant late summer’s evening.

A bum approached. A street person. (It seems that we’re supposed to refer to them as “the homeless” out of respect now that there are so many of them.) He had few teeth, needed a shave and a bath badly. His over-size winter coat which one imagines doubles as a blanket was filthy. His long gray tangles drooped over his collar. One might turn away but he had a friendly smile.

So as not to be impolite, even thought it was obvious that the man was not going to need a taxi, “I can’t but the gentleman over there can help you.” pointing to the doorman.

“Say, you look sharp!” he said, admiring the tuxedo. “Do you always dress like that?”

“Only when I’m working.” Oops. He hoped it didn’t sound like a slight against people who weren’t working.

His eyes lit up. “No kidding! You play the piano in there?”

“That’s great! I’ll bet you can make a buck.” He looked out at the street. “Y’know, ya’ gotta make nine hundred dollars a week just to get by in this town.”

The pianist winced a little as his earnings that week were pretty nearly guessed.

The man continued, “I’m not from here, and I’m thinkin’ about gettin’ out soon.”

“So you play the piano in there, huh?”

He stepped closer to where a bad smell became very noticeable, and with breath that stank of cheap wine, he chimed,

“It’s not the pale moon that excites me,
That thrills and delights me,
Oh no!
It’s just THE NEARNESS OF YOU!”

He continued, and the beauty of his voice was startling! Though a little gravelly from exposure to the elements and too much alcohol, the full, rich baritone shone through. His phrasing was lovely, and his pitch and intonation impeccable, starting in D-flat and ending precisely in D-flat.

The pianist was taken aback, “You have a lovely voice.”

The pianist suppressed the inclination to make some platitude about pursuing a singing career.

“Things used to be easier. I used to live in Chelsea. 23rd Street, 24th Street, 25th Street. You could always get a room. That’s all I needed. Just a room.” Then, “I live on the street now.”

An uncomfortable silence. The pianist did not want to say, “I know.”

The homeless man continued, “Maybe the East Village. I haven’t been down there in awhile. Lots of struggling artists. Struggling artists are good people. Y’know, they all chip in on a place together.”

To which the pianist replied, “It’s tough down there, too. The whole city is tough.”

“You know how tough it is, don’t you?” asked the homeless man inquisitively.

“Yeah.” answered the pianist cautiously, aware that the time he spent “paying dues”, living in uncomfortable shared apartments, was still a far cry from the street.

“Down in the East Village, they got those condos down there too now, huh?” Y’know what they do when they wanna make a condo? Throw a little cash at you. Tell you to get out. Like in Chelsea…” He was becoming a little overwhelmed at being taken seriously.

Sensing break-time was over, the pianist wished he could invite his friend inside. He glanced at his watch. “I have to go back to work.”

Offering a grimy hand, the man said, “Thanks.”

Accepting the hand but not the thanks, “It was nice talking with you.”

“Good luck.” said the man, enthusiastically, as if to say, “Sing for me, too.”

“Good luck.” he repeated, and offered his hand again.

“Good luck.” a third time, as they shook hands.

“Damn!” thought the pianist as he returned to the keyboard. “Why didn’t I give him twenty bucks?” He turned to the mike, and pouring from him quite spontaneously came his most joyful rendition of “THE NEARNESS OF YOU” in D-flat. And somehow it didn’t matter that the people still weren’t listening.”

Get the latest news and information direct from Rich Siegel